The EPD for the 2021 genetic evaluation of the Huacaya and Suri populations are complete. Expected progeny differences (EPD) and accuracies are now available for each trait with this year’s analysis including observations for at least one trait on 41,774  Huacaya and 9,284  Suri animals. Including pedigree information resulted in analysis of and EPD for 81,423 Huacaya and 17,679 Suri animals. New to this year’s analysis is that an inbreeding coefficient was also calculated for all animals in the registry at 277,973 total.

The following report summarizes the data used in the evaluation and the results of the EPD and accuracy calculations for both Huacaya and Suri for each trait as well as the new approach to calculating inbreeding coefficients. Percentile rankings by sex and possible change tables are included in this report and therefore animal rankings for each trait within the Huacaya and Suri populations can be determined from tables presented below. Rankings are split by sex (males and females) to give breeders a more precise idea of where their animals rank in the overall population by sex. The percentile rankings for animals should be interpreted with care and in the context of the overall goals of the breeding program—a leader in one trait may be deficient in others and the overall merit must be judged in that context. Two primary considerations include:

The number of observations for each trait used in the calculations is presented in Table 1 for both Huacaya and Suri. The counts in Table 1 include the numbers of observations in the Alpaca Owners Association, Inc database that were submitted and then available for use in the EPD calculations. As in previous analyses, some observations are outside of the range of allowable age at measure (age in days must be greater than 270 days), or there is not sufficient information to determine the age of the animal when the measurement was taken (i.e., missing birth or measurement/sample date). To be usable for calculating EPD, the age at which an animal is measured must be known and then the animal must meet age restrictions. For the few animals where calculation of an age is not possible, the animal still received an EPD for the trait, but the EPD is based on the performance of relatives and does not include the animal’s own observation.

To achieve the most accurate EPD possible, available performance data on all related individuals is used after being weighted by the animals’ genetic relationship to all others in the EPD program. This is done separately for Huacaya and Suri. The calculation of the relationships amongst all animals in the evaluation population begins with a list of animals with performance information on any trait (e.g., fleece weight, fiber diameter). Animals on this list then have their pedigree traced back 4 generations and these ancestors are then included in the EPD analysis. For those animals that do not have a 4-generation pedigree in the AOA registry (i.e., original importations and animals that are within 3 generations of an original import), pedigrees are constructed back to the original imports.

The constructed pedigree for Huacaya included 81,423 animals and for Suri included 17,679 animals. These animals and their relationships formed the basis for the EPD calculations and these animals all received EPD for all traits.

Originally, coefficients of inbreeding were calculated within each of the Huacaya and Suri populations for animals involved in the EPD program. In the 2021, analysis all animals in the AOA database were included for the inbreeding calculations with a total of 277,973 animals receiving the inbreeding coefficient values.

With the exception of birth weight, these EPD are calculated with multiple trait models that leverage information on genetically related traits in order to increase EPD accuracy. These genetic relationships enable the EPD system to use information on one trait to predict genetic merit in another because genes influencing one trait can also influence performance in the other traits of interest. The strength of that influence is reflected in the genetic correlation between two traits. For instance, the genetic correlation between fiber diameter and standard deviation of fiber diameter is .66 in Huacaya. A .66 genetic correlation indicates a strong tie between the two traits with many genes influencing fiber diameter also influencing standard deviation of fiber diameter. Leveraging information in a multiple trait analysis results in more accurate EPD. The EPD from this analysis result from the analysis of 3-trait combinations with fleece weight as fleece weight had the greatest number of observations reported in both Huacaya and Suri in the original, developmental data set.

The birth weight analysis takes a slightly different approach with the birth weight EPD produced using only birth weight information in a single trait analysis. The birth weight evaluation is similar to the other evaluations in that accounting for environmental (i.e., nongenetic) factors influencing performance is essential to producing more accurate EPD. For birth weight this is accomplished through “contemporary groups”, where a contemporary group is defined as all animals born on the same farm and in the same year. This combination is designed to account for climatic and nutritional variation from year to year on the same farm and for managerial differences between farms.

The EPD for Huacaya and for Suri are calculated independently as genetic linkages (i.e., animals producing progeny in both) between the population are small.

Accuracy values provided with each EPD, offer an easy method for evaluating confidence in that prediction with accuracies closer to 1 yielding more confidence than EPD with lower accuracies. No matter the accuracy, however, the EPD for a trait is consistently a better prediction of an animal’s genetic merit than its own performance alone. The EPD are based on considerably more data than just that of an observation on the individual. EPD take into account data and performance from ancestors, collateral relatives (e.g., half sibs, full sibs), the individual itself, and progeny (if available); adjust for differences in age of the animal at measure; and account for nutritional and climatic differences across herds through appropriately designated contemporary groups. In total these characteristics result in a better prediction of genetic merit than individual performance alone.

As with the 2020 analysis, the base for the genetic evaluation has been fixed. The term “base” refers to a group of animals from which all genetic comparisons begin. The base population is set as all animals with no parentage information in the 2014 analysis. Likely these are the animals from which the US population arose (i.e., original imports). As historical information has been added to the database more animals from the original importations have been included in the EPD calculations resulting in a scenario where this group of animals has become more consistent from one analysis to the next with the list finalized in the 2014 analysis. By setting a permanent base, genetic trend over time more accurately reflects the genetic progress breeders have made through selection.

From a larger, breed-wide view, the genetic trends of animal populations often provide perspective on changes within a breeding population. These trends can provide useful information and a means to identify traits that are experiencing unfavorable change and to identify other traits where further change may not be desired. In this instance, given the relatively separate nature of the Huacaya and Suri breeding programs, those trends are presented below by group (i.e., Huacaya and Suri). These trends must be interpreted with care, as not all breeders and not all animals are involved in the EPD program (some animals are included through pedigree alone). Besides the addition of young animals, older, existing animals are introduced to the program annually adding more information to the analysis. These new animals are often added with little performance information and therefore their EPD are low accuracy and can dampen overall genetic trend. 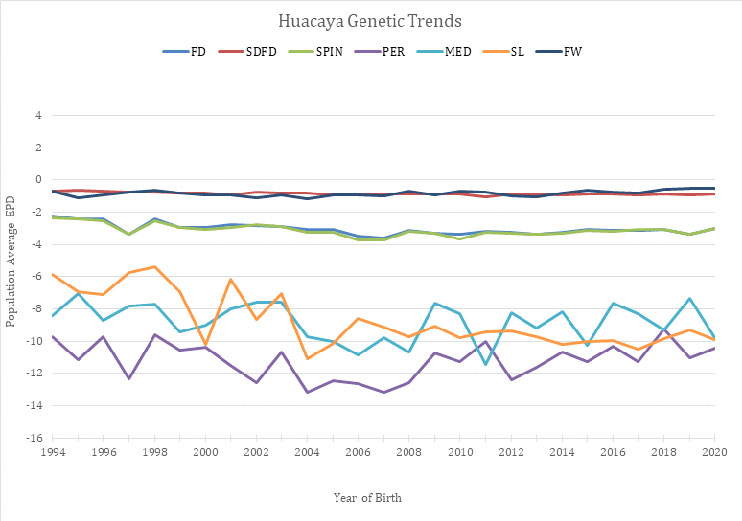 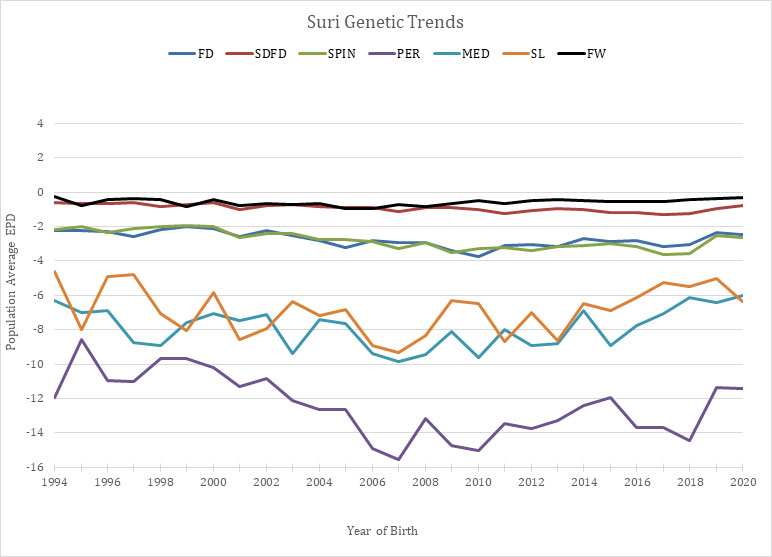