Objective fiber testing can be a powerful marketing and genetic selection tool when used properly. Objective measurement is an assessment made without the influence of personal feelings or prejudice. Visual appraisal and fiber handling are fundamental aspects of fiber judging, but are very weak appraisal methods for accurately identifying average fiber diameter. Instrumentation can accomplish the measurement of fibers with accuracy in the tenths of a micron (one millionth of a meter). The difference between a sample averaging 20.5 microns and one at 22.5 microns is very small in physical terms, but it is critical in terms of commercial use and pricing structure.

Fiber testing technology gives breeders a useful tool to analyze fiber and track the progress of their selection programs. The determination of average fiber diameter helps identify the best end use for fiber and is information that mills require before making their purchasing decisions.

The ability to provide accurate information on fiber quality places natural animal fiber producers in a stronger position to sell their fiber for what it is worth. Very few people buy and sell commodities without knowing everything they can about them. Information is power in the marketing world, and objective fiber assessment provides it.

Instruments in the Lab 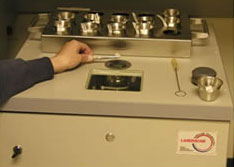 There are four approved instruments and methods, the most widely used instruments now being OFDA 100, and Sirolan LaserScan. Their development followed many years of use of the Airflow and Projection Microscope, which are both still in use. Test methods are approved by the International Wool Testing Organisation (IWTO) and the American Society for Testing and Materials (ASTM) and are performed in laboratories under standard conditions for testing textiles, i.e., 70° F, and 65% relative humidity (+2% RH). Yocom-McColl in Denver, CO has all four instruments, but performs fiber diameter testing using only LaserScan, OFDA 100, and microprojection.

Sirolan LaserScan, (CSIRO), and Optical Fibre Diameter Analyser, (BSC Electronics) were both developed in Australia. These two instruments are calibrated using Interwoollabs tops, the only recognized supplier of calibration tops to the worldwide textile industry. A diagnostic and calibration check is performed each day on both instruments. For samples averaging 26.0 microns and finer, the accuracy of measurement is plus or minus 0.2 microns when the tests are performed properly under standard conditions.

The LaserScan instrument measures fibers by dispersing individual snippets (two millimeter lengths of fiber) in a solution of isopropanol and water and this fluid transports the fibers through a glass cell where each one intersects a laser beam. The LaserScan measures the change in the signal generated when the shadow cast by the fiber snippets falls on a light detector. The signals, which are directly proportional to the fiber diameter, are recorded electronically and analyzed almost instantaneously by computer. 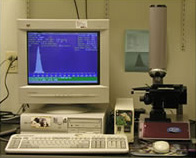 OFDA 100 was approved as an IWTO standard in 1995. Mark Brims and his company, BSC Electronics, designed the instrument. It uses a video camera to produce electronic images of magnified fibers which are distributed over a horizontal glass slide. Software analyzes the fiber images and derives measurement of diameter of a large number of longitudinal fiber sections. OFDA 100 also measures and calculates the distribution of fibers (SD and CV) as well as average fiber diameter and several other fiber diameter related characteristics. Both of these methods provide the wool and textile industry with high volume testing applications.

Airflow measures the flow of air through a sample of wool and provides an indirect measurement of average fiber diameter. It does not give measurements of standard deviation and coefficient of variation and must be calibrated using wool samples that were originally measured by microprojection. Airflow assumes wool density is always constant, and this has caused problems with wools that are less dense (particularly those containing medullated fibers). According to the Australian Wool Testing Authority (AWTA), Airflow can also be affected by large variations in Coefficient of Variation (CV), providing coarser results with a large CV and a finer result with a lower CV. It was the normal measurement for micron results in Australian wool auctions until the summer of 2000.

The projection microscope provides the only primary reference method available for the direct measurement of the mean fiber diameter and distribution of wool fibers. All other instruments are calibrated using standard wool samples where the diameter and distribution values have been determined using the Projection Microscope. (See Image 4) Projected fiber images are individually measured at 500X magnification. However, this method is time consuming and expensive and only used occasionally nowadays for special jobs.

OFDA2000 and Fleecescan are two instruments developed in Australia for on-farm fleece testing with the objectives of separating superfine wool from flocks of fine-wool sheep and assisting with genetic selection based on fineness characteristics. The reason for the former practice is a premium paid for superfine wool. One of the problems of measuring purely for marketing reasons was in many cases when the superfine wool was removed from the clip, the remaining wool had a higher micron with a lower market value. The additional labor and testing expense to separate the superfine wool is not always economically justifiable.

The OFDA2000 and Fleecescan are not approved by IWTO or ASTM. Wools separated into different micron ranges by these instruments still have to be core sampled and tested by IWTO and/or ASTM approved methods and instruments when offered for sale.

The OFDA2000 measures the dimensions of raw (i.e., greasy and dirty) fibers and then uses a constant correction factor (within a "mob") to estimate the true dimensions. This correction factor is measured and calculated on-site and is typically the average of 30 samples. Since the cleanliness of every sample measured is different, this practice limits the accuracy of individual measurements.

The OFDA2000 has a built-in compensator for temperature and relative humidity that adjusts for the ambient air at the testing location. Thus it can only be properly used on samples that have been given time to reach equilibrium with the ambient air. OFDA2000 is not suitable for testing raw, unconditioned samples at a central location since raw samples from different areas of the country contain varying amounts of moisture that affect fiber diameter. Also, it would not be possible to use an appropriate grease correction factor. The only way to accurately test wool or other animal fibers is for the samples to be washed, dried, and conditioned at standard conditions for testing textiles, a worldwide requirement.

The OFDA2000 tests fewer than 100 fibers (depending on the fiber diameter and staple length) from tip to base in five millimeter increments for a total of about 1500 measurements.

It produces a fiber profile reflecting aging, health/production status, and environmental conditions the animal was subjected to during the growth of that particular staple length. Typically, a mid-side sample is measured to estimate the average fiber diameter of the whole fleece. Other (more accessible) locations (e.g., the pin bone) have also been investigated.

The OFDA2000 uses the same basic technology as its parent the OFDA 100 with the exception of measuring multiple fibers in profile. The OFDA 100 is actually capable of measuring one fiber at a time in profile but this measurement is slow and tedious, and probably only used by researchers.

The Fleecescan is transported in a trailer. This system minicores each fleece and chemically cleanses the sample that is then tested on a specially designed LaserScan heavily protected to avoid damage as it is being moved.

Yocom-McColl uses both LaserScan and OFDA 100 to test fiber of individual animals. We can measure average fiber diameter, diameter distribution, spin fineness, curvature, curvature distribution, and comfort factor on the LaserScan. Using the OFDA 100, we measure all of the above plus medullation on white or light-colored animals. Comfort factor is the percentage of fibers greater than 30 microns subtracted from 100 percent (in other words, a marketer's positive "spin" on the original term "prickle factor".

We test individual animals using two millimeter snippets obtained across the base of the two inch square submitted sample. In this way, we are able to provide estimates of the genetic uniformity of the sample at a precise environmental time.

The Laserscan and the OFDA 100 test from 2,000 to 4,000 individual snippets per sample either core sampled (minicored) or guillotined. When guillotined at the base of the staple, all fibers measured were produced at the same time and in the same environment. Such a measurement indicates the genetic fineness and uniformity of the animal (at a specific age) that can be extremely valuable for selection purposes.

Neither LaserScan nor OFDA measure relaxed staple length. Yocom-McColl measures average staple length on an Agritest instrument according to IWTO 30 on relaxed, conditioned staples marketplace. I believe that any initiative that make's alpacas more productive in the long run will ultimately benefit every breeder.