The EPD program has now passed its five-year anniversary and some of you are still wondering, “What is this all about?” Expected Progeny Differences (EPD) are the future of the alpaca industry and are used in most all serious livestock breeding to help owners make better breeding and buying decisions. The calculation, called Best Linear Unbiased Prediction (BLUP) is the same in all industries. They only difference is the traits that are utilized.

Since the beginning of alpaca breeding in North America, and indeed domestic alpaca breeding throughout the world, breeding and buying decisions have been made with very subjective data. How the alpaca looked and felt, along with visual genetic defects were the primary methods of selection. Alpacas were added into breeding programs because they were great looking animals that seemed to produce offspring with a consistent look.

Later, the industry began to rely more heavily on the science side of breeding to assist in these decisions. By utilizing pedigrees of alpacas that were registered through scientific testing (blood typing and later DNA testing) producers were able to increase the accuracy of their decisions even more. The broad use of fleece testing provided even more data. The use of histograms further advanced their cause and helped many to move beyond simply looking at an alpaca and making decisions based on what they saw.

These methods were acceptable at the time and still remain very important. In fact, these selection methods have proven to help improve a producer’s herd and have also taken the North American herd in a direction that has helped ensure a high population of quality animals.

While continuing to use these tools, the scientific information provided by EPDs should be considered as a tool to help the producer increase their rate of genetic gain. This is the rate at which they see genetic improvement in their overall herd. EPDs used in conjunction with other current breeding selection information, such as histograms, can improve herds faster when compared to herds that are not utilizing this scientific information.

What Exactly are EPDs?

While the calculation that is completed is very complex, the resulting EPD value is very easy to use by the owner. The EPD value is essentially an assigned number for each trait that is measured. This value is always in the unit of measurement of the trait itself (i.e. microns for Average Fiber Diameter, pounds for Fleece Weight), which makes it simple for the producer to utilize that information for breeding decisions. These values could be a positive or a negative number, and whether that is good or bad depends on the trait.

For example, when looking at Fleece Weight, a positive number is good because we want to produce a heavier fleece. However, in average fiber diameter (AFD), a positive number is bad because we want to produce a finer fleece in most cases. As a result, we would hope for an AFD that is negative which would indicate that our alpaca will produce offspring that, on average, are finer than like animals across the North American herd.

In addition to the EPD, an accuracy rating is provided. This is a number, between 0 and 1, provided to a producer to help give an idea of the confidence they can place in that EPD. Accuracies of about .4 or .5 are excellent and can be relied on much more than lower accuracies.

The accuracy number serves a very important purpose in EPDs. As more data is collected the accuracy number becomes better defined. This means that as more alpacas are entered into an EPD program, the higher volume of data causes accuracies to rise, making EPDs even more reliable. The accuracy number is therefore a gauge on data collected and helps the breeder determine how much weight to place on a particular EPD value.

However, it is important to understand that just because the accuracy is very low, it does not mean that the EPD should not be used to help make breeding and buying decisions. The producer should utilize the information because it is still more information than they had before and will increase their rate of genetic gain.

While it is not feasible for most alpaca owners to pay for fleece tests on every alpaca, it is important to include what you can. The added information will make your EPDs more reliable by increasing the accuracy. Even including alpacas that appear to be lacking in certain areas is a good idea, because it gives a much better picture of breeding animals and will help to improve a producer’s herd more quickly than it would if data is excluded. Even non-breeding and gelded alpacas produce fleece whose data is relevant to the EPD calculation and can help increase the accuracy of the EPDs on related alpacas who are still breeding.

EPDs and Other Livestock 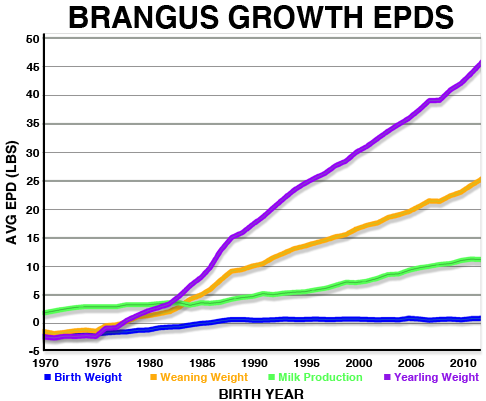 EPDs are a proven method for increasing genetic gain that has been used for decades in all serious livestock industries. The bovine, swine, sheep, and equine industries have proven that use of EPDs can dramatically improve the national herd and help produce animals with the traits that are highly sought after by the industry and market. As an example, look at the chart below from the cattle industry.

This is a perfect illustration as to the progress that can be made when the industry fully embraces EPDs. As you can see, after they implemented EPDs in the late 1970s, they saw a dramatic increase in Yearling Weight and Weaning Weight, and a slight increase in Milk Production, which is what they were hoping for. At the same time, it is a good illustration that sometimes EPDs can be used to help ensure that there is no (or very little) change in a particular trait. In this case, they did not want to see an increase in Birth Weight because they did not want to see an increase in dystocia, because of the risks and inconveniences associated with that.

Everyone in the North American alpaca industry can utilize EPDs to benefit their business. The only restriction is that alpacas must be registered in order to submit fleece testing for inclusion in the EPD program. This is because the calculation is based on genetics and must have a valid pedigree since it heavily uses the relationships between alpacas to produce the EPDs. AOA’s registration process includes DNA testing to help ensure there is a parental relationship, which helps ensure the EPDs are even more useful.

AOA currently collects data on about 16 traits. These traits are often called performance data because they come directly from animals that are submitted for inclusion in the program. Because alpacas are fiber-producing animals, most of these are fleece traits. However, AOA also collects information on Birth Weight, Weaning Weight, and Birthing Ease. While the Registry collects data on all of these traits, there are currently only nine traits in which EPDs are provided. That number will rise to 10 in the Fall 2013 calculation as Birth Weight is added to the mix. It is important to note that performance data differs from EPDs in that the performance data is for a particular alpaca and EPDs are used to help predict the genetic outcome of offspring of two potential parents.

So now many of you are asking “How do I participate and what will it cost me?” AOA does not charge for participation in the program. The only fee producers pay is to Yocom-McColl Testing Laboratories for submitted fleece tests. Yocom-McColl forwards the results directly to AOA for inclusion in the program and sends a histogram report to the producer.

Many of you may already have EPDs for your alpacas even if you haven’t submitted data. This occurs because animals that are related to yours have had data submitted and EPDs are calculated up to four generations out. The simplest way to see which, if any, of your alpacas already have EPDs is to login to the AOA online system and click on the ‘EPD Report’ under the ‘Alpacas’ menu. This gives you the option to export a list of all alpacas in your AOA herd and their EPDs. If an alpaca has EPDs, they will also be displayed on the alpaca’s page in the logged in area of the AOA online system. However, they will not be available to search for other AOA members unless you choose to make them public. This can be done on the individual alpaca page itself or globally for your whole herd in the ‘EPD Privacy Settings’ under the ‘Profile’ menu.

EPDs are already making a difference in the alpaca industry. Many people have fully embraced the EPD Program and are using it to help improve their rate of genetic gain. The EPDs are helping these farms to get a head start on others in the industry. By using EPDs, they are seeing their herds improve genetically at a rate that surpasses anything they have seen with other previously used methods. They also realize that the science behind EPDs is helping leveling the industry playing field because they have the science to back up their decisions, marketing, and sales.

EPDs are the future of the alpaca industry and will eventually be fully embraced by all serious breeders of alpacas and producers of fleece as a way to ensure success in their businesses by producing the best possible product. If you would like to begin submitting fleece samples for inclusion in the program, download the Guidelines for Preparing & Submitting Fleece Samples for EPD Analysis. This guide will tell you everything you need to know about how to submit your fleece for testing and inclusion in the next EPD calculation. Also consider reading through the other articles on the EPD page to learn more about the program and EPDs in general. If you have further questions, please contact the office.

The current traits EPDs are calculated with